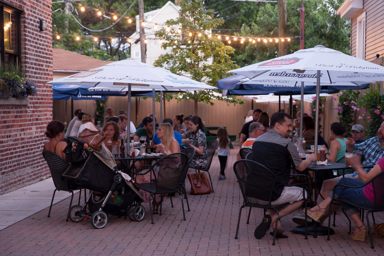 Bricks is located in the North Center neighborhood of Chicago. Known for its slow-smoked barbecue, thin-crust pizza, the restaurant is also a haven for craft beer enthusiasts. Big Bricks features beers from nearby Lincoln Square and North Center breweries in Chicago and beers from around the world.

In addition to its amazing bbq and pizza, Bricks menu includes salads, sandwiches, tacos, and more.

Our barbecue slow-smoked in a genuine Oyler smoker with hickory and applewood to give you the perfect amount of smoke to enhance the flavor of the meat. We believe it’s bbq the way it supposed to be.

Pizza is thin-crust style with a range of choices from the spicy and adventurous to the traditional and straightforward.

You top this off with welcoming and friendly service and genuine North Center neighborhood charm, and you’ve got a place worth calling a second home! We look forward to serving you!

There are no tables available.

Join the waiting list and we'll let you know when your table is ready.